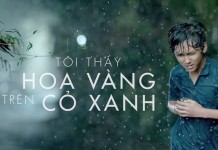 To create beautiful wide-angle shots from above, the crew of “I see yellow flowers on green grass” used specialized flying equipment along with a series of expensive cameras and lenses.

The film crew used a flying device (drone) called Octocopter x8. This drone is attached with Panasonic Lumix GH4 and Black Magic 4K camcorders, which can record movies with resolutions up to 4K (Ultra HD), for high detail.

With the advantage of being compact (because it is a mirrorless camera) and using a video format suitable for cinema, the Lumix GH4 is still chosen by many filmmakers despite its price tag of only 1,400 USD for the camera body. Meanwhile, Black Magic 4K (priced at about $ 3,000 for the body) is a familiar specialized device for blockbuster movies. The advantage of this model is that it can use many high-end lenses for high optical quality.

According to Mr. Do Quoc Viet, representative of the Viet Flycam group – the team in charge of controlling the drone to make shots from above, in order to achieve the highest visual effect, the film crew used all the high-end lenses of the company. Carl Zeiss, with many focal lengths such as 21mm, 24mm (medium and full scene), the widest angle used is up to 12mm.

For the ground scenes, the crew performed with an Arri Alexa camera as well as a variety of lens focal lengths.

Talking to Zing. vn, an experienced person in the film industry in Ho Chi Minh City said that the equipment used in the film I saw yellow flowers on green grass is not cheap. The film crew used a variety of shooting equipment, including a Flex4K camera (which costs up to 110,000 USD) to make slow-motion scenes. This equipment is rented from abroad for 80 million VND/day.

I see yellow flowers on green grass is a film adaptation of the work of the same name by writer Nguyen Nhat Anh. The film attracted the attention of domestic wide-screen audiences and was highly appreciated by critics for its visuals. In the film, viewers can enjoy many beautiful camera angles from above, gliding through fields, rice fields…, clearly depicting the beauty of rural Vietnam.

Google projects that will change lives