The days of the huge popularity of WiFi are coming to an end. But there is no reason to be afraid, even easier and more advanced wireless technology is coming. That being said, it only takes a few seconds to download a movie with 4GB of storage. If you stand under an electric lamp again!

It’s hard to believe, but such technology is coming. With this technology, large storage games and movies will be downloaded in the blink of an eye. Tanvir Tanim Sutra writes in detail about the new medium of data exchange in today’s first episode of Jugantar – Light Fidelity.

In 2011, Harold Hass, a scientist of German descent at the University of Edinburgh in Scotland, invented the first LIFI technology. In this technology, it is possible to exchange information through light. In this case, the technology uses visible light waves as a means of communication. Where invisible wireless waves are used in WiFi.

WiFi offers more bandwidth, ease of use, efficiency, and security than WiFi. So this technology may be most suitable for high-speed wireless communication in a particular region. Surprisingly, using this technology called LIFI, information can be exchanged from street lights to current automatic technology vehicles through headlights.

Since the speed of light is very fast, the speed of exchanging information in this system is also very fast. At the same time, Lifetime can be a groundbreaking technology for home internet use. As may be seen in the future, LED lights used in homes are simultaneously illuminating the house and contributing to the creation of a local network inside the house. Even every electric light in the house can be used as a router for LIFI technology.

What is LIFI technology?

Nowadays, WiFi is the most trending domain of wireless communication. Through this, the number of internet users is increasing at a geometric rate. And even higher speed, efficiency, bandwidth access will be available in LIFI.

With this technology, data can be easily exchanged using LED lights on computers, laptops, and even mobile phones. LIFI’s data transmission range is 100 times faster than WiFi’s. The technology can transmit up to 224 gigabytes of data per second, while the maximum speed of WiFi is about 600 megabytes per second. However, this technology also has a significant limitation. Light cannot penetrate any wall.

As a result, the customer will be disconnected from the internet connection as soon as he leaves the room where the WiFi network is located. However, many see it not as a limitation of life, but as an advantage. As a result, the signal will be confined to a confined space. So data transmitted through light will be much more secure. No one will be able to use the password again. 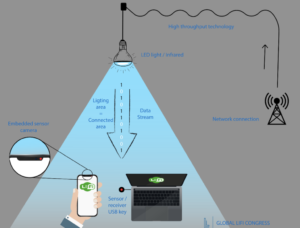 The WiFi system basically has two parts. Transmitter and receiver. The input signal in the transmitter section can be modulated over time. It then transmits data using LED bulbs in the form of 0’s and 1’s. Here the light of the LED bulb is denoted by 0 and 1.

Need to Technology Always be an Supreme Aim throughout Apps Entire...