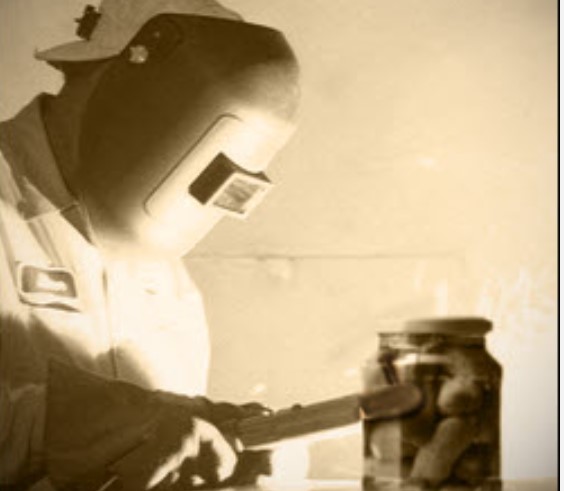 You remember how to open super-strong “stuck on” lids from jars or tight caps from beverage containers don’t you?

Every once in a while, we see a sudden disappearance of what was once elementary kitchen “know-how” for speeding up tasks or simply making them safer and easier. Tasks like removing an extremely tight, vacuum sealed twisting lid from a container.

Either young cooks were never shown, or older cooks just keep forgetting. Kitchen gadget sellers even take advantage of this by peddling rubber “grip pads” and even special “Lid Wrenches” for those tough tops, removing them like magic. Guaranteed!!

Some years ago, on a popular prime-time sit-com, two young men were working like beasts to twist the metal lid from a glass jar, gripping it tightly and trying to force it open with brute strength, occasionally rapping it against a table (as if that would do any good).

Admittedly these were actors playing out a script that called for the jar to shatter so that one of the characters would end up getting stitches, but the idea of struggling to get a container open and doing it the hard way just makes a viewer cringe.

What seems odd is that these characters were scientists, and it was the physicist that broke the container! His character should have known what to do.

Simply holding the jar’s metal cap under warm running tap water for 60 seconds would have expanded the metal and loosened it up more than enough to twist off with ease. Incidentally, it would have worked just as well if the cap were made of plastic.

Alternately, if the contents of a container are going to be used up completely, the lid can be made 100% removable with super ease by carefully poking a tiny hole in the top. This breaks the vacuum and removes all of the stress and struggle of getting the stubborn lids off.

Read More: Google Lens Could Become an Option for Diabetics

Believe it or not, tips like these still have to be passed along. Especially to keep young budding chefs from hurting themselves just trying to get pickles out of a jar!