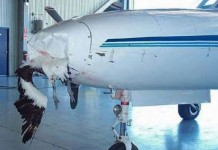 Have you ever wondered why birds have enough strength to smash a plane’s head?

At about 19:20 pm on September 30, a Vietjet plane was hit by a bird, causing a large dent and a tear in the nose of the plane. Right after that, the plane landed at Noi Bai airport (Hanoi) for repair.

We know that the aircraft shell is made from super durable materials, even if it is hit by lightning, it is still “unharmed”. So how can the little birds win against the “iron bird”? The following article will help you explain that.

Birds are a big obstacle to flights

We often think that birds’ bodies are very soft and spongy thanks to their feathers. However, physicists say this is actually a misconception.

Because, after all, birds are “flesh and bone” creatures, which means they are very hard – when hitting a hard object at high speed, the results will not be as good as we think.

First of all, try to ask the question: why can the plane’s shell be dented? The answer is pressure. The difference in speed between the “iron bird” and the bird would normally create enormous pressure on impact, enough to cause the plane’s shell to dent.
Consider the following example to see the force exerted by a 1kg bird on a Boeing 747 – one of the most popular civil aircraft in the world.

Let’s first consider speed. Most bird strikes occur during take-off and landing. Therefore, we will use the take-off velocity as the standard – the speed of the Boeing 747 during this period is about 92m/s. Next is kinetic energy. The kinetic energy in this case is calculated based on the speed of the plane with the weight of the bird being 1kg. So we have:

Assuming the bird collides with the plane at a distance of 5cm, the force of impact can be calculated:

A Boeing 747 can withstand a wind pressure of about 7,300 Pa, where the safe threshold for the wing shell is 3 times the normal wing pressure.
Airplane shells will often dent or tear when subjected to 6 times more pressure, ie 43,800 Pa, equivalent to 0.044 MPa. We can see that the allowable pressure of the fuselage is nearly 19 times lower than what is caused. when you hit a bird. Therefore, a small bird can dent the plane’s shell easily and can even cause disaster if it flies into the plane’s engine.

And aviation accidents are caused by “little birds” In the history of aviation in the world, there have been many tragic accidents that happened just because of hitting birds. You can refer to some typical examples below: On September 22, 1995, a US Army Boeing E-3 Sentry AWACS crashed not long after taking off from the base. The reason is that a few wild geese flew directly into the engine, causing the entire fuselage to be seriously damaged. The plane crashed about 3 km from the runway, killing all 24 people on board.

In April 2007, a Boeing 757 while flying from Manchester (UK) to Lanzarote (Spain) suffered a right engine failure due to a bird flying in.
The crash forced the plane to return to Manchester and make an emergency landing. Fortunately, the plane landed safely, but more than 200 passengers had to experience a heart-stopping moment.
On January 4, 2009, a red-tailed falcon crashed into the windshield of a helicopter in Louisiana (USA). The collision caused the plane to lose power and fell into a swamp, killing 8 people and seriously injuring 1. According to statistics from FAA – the US Federal Aviation Administration, since the year In 1988, plane crashes caused by bird collisions killed more than 200 people and caused damage to up to 400 million USD (about 8000 billion VND at current exchange rates).
Follow Another: The drone used for the footage of “I see yellow flowers on green grass”

All You should know About Personal computer Tech Help

10 Tech Answers to Improve Your quality of life On the...